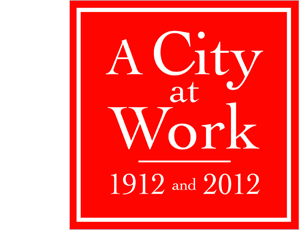 Tim Olson, 2012:  In the spring of 1912 two itinerant photographers arrived in Dubuque to shoot the pictures that would become the Klauer Collection. For three weeks they traveled throughout the city with a large-format camera and a magnesium powder flash lamp photographing workers in factories, offices, shops, saloons and even the operating room of St. Joseph Mercy Hospital. We don’t know the photographers’ names, though they each posed as customers when needed, leaving us several self-portraits. Their objective was probably to sell prints to the people and businesses they photographed, though whether or not their venture in Dubuque was profitable is another unknown. But when the photographers moved on to the next project in the next town, they left behind roughly 440 extraordinary photographs documenting a city at work.

Fortunately for us, instead of selling the plates for reuse, the photographers sold them to Peter Klauer, then President of the Klauer Manufacturing Company. The photographers had made several shots of the Klauer factory, and Peter Klauer bought at least fifteen of the prints. But he also must have sensed the value of the entire set of images shot in Dubuque and so he bought the plates and stored them in a Klauer Manufacturing warehouse. Peter Klauer died in 1919 and the plates remained in storage—occasionally thumbed through by the curious, but mostly forgotten—for 60 years. In the 1970s the plates were pulled out of storage and at least two sets of contact prints were made. In the 1980s, William Klauer, Peter’s grandson, donated a set of contact prints (numbering 443) to the Center for Dubuque History at Loras College, and later 330 of the 8.5 x 6.5 glass plates—all that then remained—were donated as well. This collection of prints and negatives is now known as the William J. Klauer, Sr., Collection.