"The first European settlers in the Castle Grove area of Jones County were of Irish origin, arriving about 1846. They were visited regularly by Father Jeremiah Trecy from Garryowen on his missionary circuit. Then they were visited by Father Patrick McGuinnes. In 1853 he directed the building of the first church, dedicated to Saint Aloysius Gonzaga. Years later the parish was named for the Immaculate Conception of the Blessed Virgin Mary. In the incitement of the Know Nothing animosity toward Catholics and immigrants, the small church was burned to the ground soon after its completion. “Upon the ashes and ruins of it the holy sacrifice was offered the day following, and the new stone church is now nearly completed,” the Catholic Almanac for 1856 reported. No real town grew up around the church, but Castle Grove is listed as a post office from the ‘60’s through the ‘80’s. Under the direction of Father Matthew Murphy, the school was moved to a new location and opened as a parochial school with the Clinton Franciscan Sisters in charge. Father Murphy served a long pastorate of thirty-one years. Later Father John J. Hennessy, nephew of Archbishop Hennessy, served a still longer time, from 1922 to 1966."

1853-
The history of the parish over the span of 165 years, including information about its priests and parishioners. 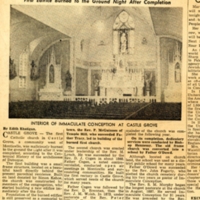 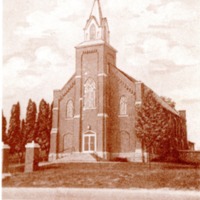