"From 1900 to 1903 Father Vincent Opava resided in a house near Saint Wenceslaus Church in Carroll Township, about a mile and a half west of Clutier. He cared for both Holy Trinity in Otter Creek and Saint Wenceslaus. In 1905, during the four-year pastorate of Father Aloysius Kolar (1903-1907), a rectory was built in Clutier. The next pastor, Father Joseph Gregor, served from 1907 to 1912. During his pastorate the Methodist church in Clutier was purchased and converted to Catholic use. When Father Gregor began celebrating Mass in Clutier every Sunday, Mass was said on alternate Sundays at Saint Wenceslaus and Holy Trinity. This continued until 1919, when Holy Trinity church was given into the care of the pastor of Saint Mary Church in Vining."

1910-2006
The history of the parish over the span of 96 years, including information about its priests and parishioners.

Hanus, Jerome. “Jerome Hanus, O.S.B. By the Grace of God and the Favor of the Apostolic See Archbishop of Dubuque DECREE Regarding Immaculate Conception Parish Clutier, Iowa.” The Witness. 16 July 2006. 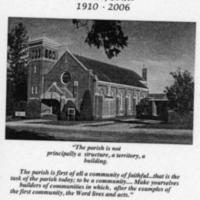 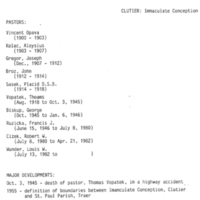