"Under Father Murphy’s guidance 21 families collected $1,285 in 1877 for a parish church. They put up a small frame building about a mile west of the present town, on two acres donated by Ben Welp. On December 8, 1879, Father Murphy celebrated the first mass in the Church of the Immaculate Conception. About the same time J. B. Determan, Killian Kunkel, and Henry Lemker started a one-room parochial school for 25 children. Miss Mary Foley was the first teacher. Miss Mary Tasshaller and Miss Gertrude Eich were later teachers, using the same course of studies in secular subjects as the public schools. They later joined the Dubuque Franciscan Sisters."

1912-
History of the parish over the span of about 90 years, including information about its priests and parishioners. 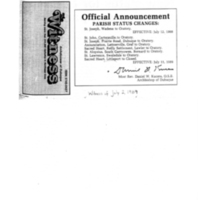