This is a digital collection of the photographic works of Peter B. Hoffman, Jr. A Dubuque native, he was born on October 28, 1889 and was buried in Mount Calvary Cemetery after he died on December 14, 1953. His parents were Peter B. Hoffmann, Sr. and Katherine (Nickels) Hoffmann. His father's parents immigrated from Luxembourg to Ohio, where he was born, and shorty thereafter to Dubuque. Peter B. Hoffmann, Sr. was a grocer, historian and politician. His mother's parents immigrated directly from Luxembourg to Dubuque and where considered "pioneer" residents of the city. The couple had seven children: Edward M., Albert D., Alvina M., Frank Charle, Vincent, Bertha K., and Peter B. Jr. The family was Catholic. Peter B. Jr. married Barbara R. Bungert sometime between 1915 and 1925, and they had one daughter, Rosalyn Marie. Peter worked in his father's store as a grocer clerk and continued in the grocery business throughout his life; he was also drafted in WWI and WWII. Although he is never named as the person taking the photos, the pictures contain multiple images of Peter B. Hoffmann, Sr., leading to the conclusion that his son was the photographer. (Note: The name "Hoffmann" appears with both one and two "n"s throughout the family and newspaper accounts.)

This record is part of the Peter B. Hoffman Photograph Collection held by The Center for Dubuque History at Loras College, Dubuque, Iowa. 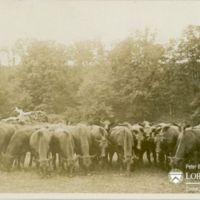 A herd of dark cattle are grazing. 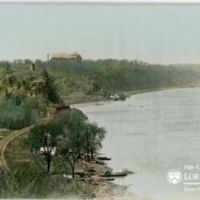 The river is to the right, while the shore to the left includes train tracks, smokestacks, boats, and houses. The Julien Dubuque monument is barely visible on one of the bluffs, with the Mount Carmel motherhouse on another bluff behind it. 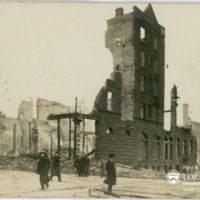 A building with only a partial frontal four-story facade still standing has been destroyed by fire. Men and women in dark clothing stand around it, and there is a horse in the lower right corner. 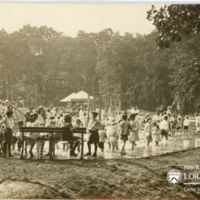 Children and parents are running and splashing in a swimming pool set in the woods with a few outbuildings around it. 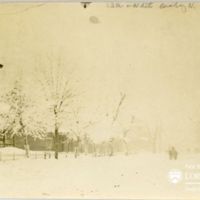 The photo is shot looking north on 12th and White Streets. The road, trees and buildings are covered with snow. There is a horse and buggy going down the road, and nuns walking on the sidewalk to the right in front of St. John's Lutheran Church,… 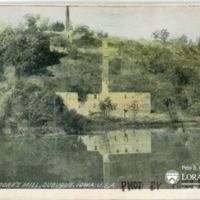 Done in color, the ruins of the mill sit at the base of a hill by the water. 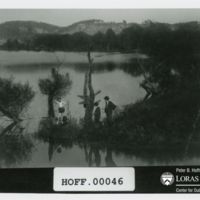 Four people stand on a natural outcropping of land extending into the river. Two remain on dry land, while the other two appear to be prepared to go into the water. 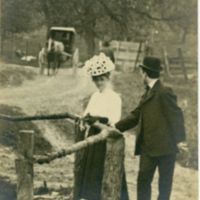 Emily, dressed in a white shirt, dark skirt and white hat, is leaning against a log fence looking toward the camera. Albert D., standing next to her, is looking backward at the horse and buggy coming down the road. 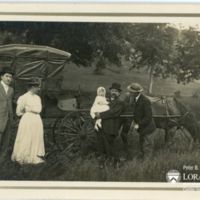 Five people stand in front of a horse - Prince - and buggy. Albert D. Hoffmann and Emily F. are to the right. A toddler-age Albert J. is being held by Peter B. Hoffmann Sr. Edward is next to them. Since Albert J. was born in 1910, this picture was… 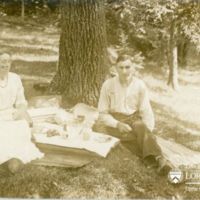 Although labeled Jodie, there are no records for a Jodie Schumacher related to Emily - there is, however, a sister Josephine. Jodie and Ed are seated outside underneath a tree having their picnic.
View all 1408 items