"Saint Joseph Parish in Dubuque was formally established by Archbishop Henry P. Rohlman on November 1, 1949, after the archdiocesan consultors had reviewed the area census of Catholics. Msgr. Michael J. Martin was immediately named the founding pastor. He had just served two years as pastor at Fillmore, and after having served as president of Loras College for 19 years. Catholics living with the newly established boundaries were asked to join in building the newly founded parish. They had belonged to three surrounding parishes: the Nativity, Saint Anthony and Saint Columbkille, Monsignor Martin invited them to Washington Junior High School for the first parish Mass on Sunday, December 4, 1949, at which Archbishop Rohlman presided. The four acres along Highway 20 between Algona and Stetmore Streets were soon cleared and prepared for building. The architect quickly designed a church-school and work on the building began in April 1950. The seven Dominican Sisters who staffed the school lived at Saint Dominic Villa in Dubuque until a house could be secured to provide a convent. The present long-desired church was completed in 1968 and dedicated on December 8th that year."

1949-
History of the parish over the span of 69 years, including information about its priests and parishioners. 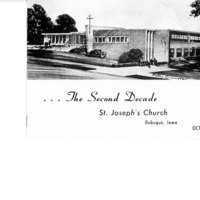