"The sketchy early history states the parish was established in 1888 and that Father D. J. Kelly, pastor of Parkersburg, was given charge of Aplington and New Hartford. The early Catholic directories indicate that the Parkersburg pastor has had charge of Saint Joseph Parish in New Hartford from that time until the present, except of twelve months in 1942-1943. For two decades the pastors served short terms. With the coming of Father Joseph P. Quirin in 1907, the New Hartford Catholics were blessed with Mass every Sunday, and that continued until 1918 when the war caused a shortage of priests in the archdiocese."

1888-14 July, 1992
History of the parish over the span of 104 years, including information about its priests and parishioners. 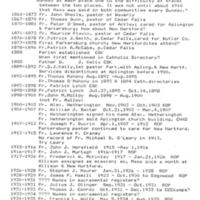 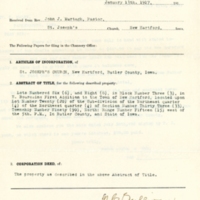