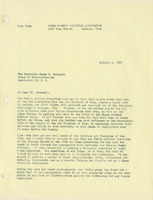 As a dedicated member of the Young Women's Christian Association (YWCA), Louise was regular presence at committee meetings. The group notably discussed a call to action in support of the Civil Rights Bill. Louise along with her fellow YWCA members endeavored to learn of the conditions and injustices experiences lived by the Black community in Dubuque. They made several inquiries around town and were displeased to learn that Black women were often turned away from hair salons under the excuse that the hairdressers did not know how to treat "Negro" hair. In 1963, the group launched a letter writing campaign to demand legislators act in favor of the Civil Rights Bill.

Louise kept informed about the actions of these legislators, reading the Congressional Record and any newspaper article available. In this 1964 response letter from Senator Hickenlooper you can see Louise's handwritten note, "He voted against the Civil Rights Bill." 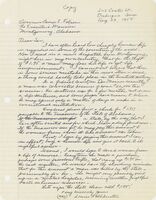 In 1958, Louise became aware of a shocking case of racial injustice towards a Black man in Alabama. Jimmy Wilson was convicted of the paltry theft of $1.95. For this crime he was sentenced to death. Louise took to her pen, writing to the Alabama Governor James Folsom lamenting the decision and enclosing a personal check to cover the amount stolen. The Governor responded unfavorably, while Wilson escaped the death penalty his sentence was commuted to life in prison.

Louise continued to advocate for Civil Rights and racial equality throughout her life.

Items such as the newspaper clipping, letters and check come together to tell us a story. The Halliburton Collection holds many other items such as these in the Civil Liberties/Human Rights Series.