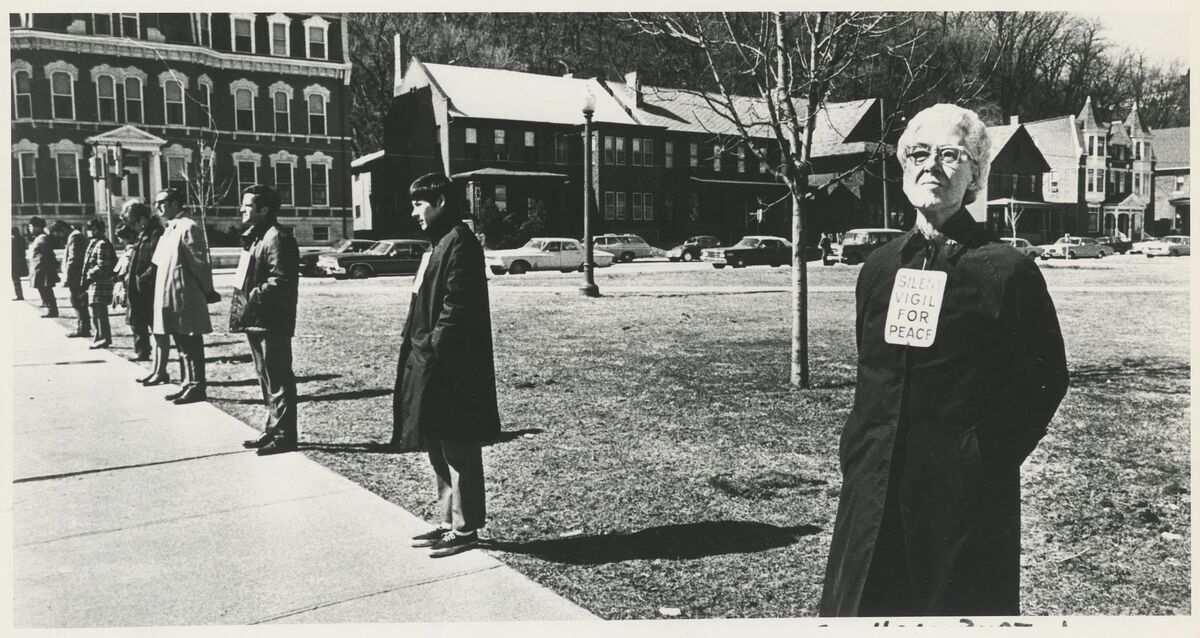 Every Sunday for seven years, Louise stood in Washington Park as part of a silent vigil against the Vietnam War.

Louise displayed this hand made sign on her front door for many years.

Louise was a supporter of peace and justice work since her first exposure to the realities of war and the military draft during WWI. She was a member of the American Friends Service Committee (AFSC) and War Resistance League (WRL). In early 1930s, while living in Franklin, Indiana with her husband Robert Alexander Halliburton, she began her activities in resistance to war. Both Louise and her husband frequently wrote to President Roosevelt urging peace.

Placard made by Louise.

Louise was the only person in Dubuque to show outwardly support of conscientious objectors to the war in the 1940s. She would often accompany these war objectors from the jail to the courthouse.

Louise was active in the formation of the first UN Branch in Dubuque. She would also take a stand against capital punishment and routinely made donations to the AFSC & WRL, aiming towards a world of justice and peace.

Louise is perhaps best known for her silent vigils in protest of the Vietnam War. For seven years, she stood alongside like-minded individuals in Washington Park with a placard attached to her chest (image on the right). Come rain or shine, Louise would stand stoically for hours. When the weather was too cold, she stood on top of cardboard in an attempt to keep her feet warm. Her dedication caught the interest of the New York Times. She featured in an article in 1970. 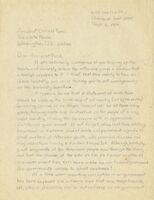 In the 1940s, Louise helped to organize the Reconstructionist Gang. This group was made up of people who sought to make the world more peaceful and just. Louise would often host meetings in her home.

Louise very regularly launched letter writing campaigns to urge politicians towards peaceful resolutions rather than violence. The Halliburton Collection contains hundreds of letters addressed to Senators, Congressmen and Presidents. For example, she wrote to President Roosevelt, to President Kennedy expressing her support of his disarmament policies, to President Nixon urging an end to the Vietnam War, and to President Ford in support of amnesty for conscientious objectors or draft-dodgers. She continued to write letters until her eyesight began to deteriorate due to cataracts in her advance age.