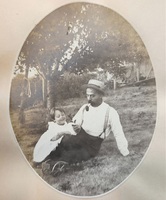 A young Louise with her father.

Louise was encouraged from a very early age to be an independent thinker. When her friend Mimi Vernon asked Louise how she developed such progressive ideas, Louise responded with only three words: "The National Geographic." Her father Edward Herron was a life-time subscriber to the magazine. Louise would spend hours poring over the magazines, gazing at the pictures before she could read. From these magazines she learned about new places and cultures developing an amazing appreciation for a diverse world.

Her father was also a prominent influence in her art. Louise and her father hiked the rural trails west of Dubuque. Once back at home, Louise would draw and paint scenes she saw on these long walks such as cows in the pasture or the vegetation in the valley.

Louise also spent time in Grundy Center, Iowa with her uncle, Dr. Eugene Crouse, during her childhood. During her visits she would attempt to read the many books in her uncle's collection.

These early years were integral in the development of Louise's gentle spirit and free-thinking nature.

Louise during her senior year in high school.

In high school girls were unable to take technical drawing class as they were only open to the boys. Unhappy with this situation, Louise petitioned the superintendent of schools for permission to join these classes. The superintendent was not easily convinced but in 1915, Louise and her friend Mildred Berg were finally allowed to join the technical drawing and woodworking class alongside the boys. They would be the only girls in the class until the Dubuque Community School District required all schools and classes be made co-ed in the 1978-1979 school year.

While this is an impressive accomplishment, for Louise the far reaching event during her high school years was convincing the other girls to change the custom of an overly feminine frock at graduation. Inspired by the speeches on women's suffrage, Louise designed and painted a new graduation style - a simple white dress with a sailor collar and a tie combining the school colors. Her female classmates were very receptive to the change and readily adopted the new attire.

During her high school years, Louise also designed covers for the school's literary magazine, The Echo. She was only one of three female students on the school magazine and yearbook staff.